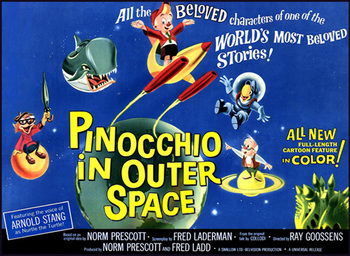 Pinocchio in Outer Space was a 1965 Belgian film directed by Ray Goossens and animated at the Belvision studio.

Pinocchio, who has lapsed back into his old ways and was changed back into a puppet as punishment by the Blue Fairy, must become a real boy again.

Pinocchio decides the only way to do so is to stop Astro the Space Whale, who is smashing up satellites in the cosmos and is practically unstoppable. After singing a musical number and meeting the Fox and the Cat - who have become beatniks of all things - Pinocchio meets Nurtle the Twurtle, an alien secret agent, and together they team up to stop the whale.

The film only had 2 animators and was produced by Fred Ladd, better known for being one of the pioneers of bringing anime to the USA.