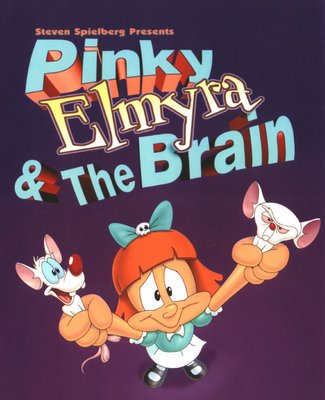 "I deeply resent this."
"Gee Brain, what do you wanna do today?"
"The same thing we do every day, Pinky — endure Elmyra, then try to take over the world!"
"Now Pinky and the Brain share a new domain.
It's what the network wants, why bother to complain?"
—from the Expository Theme Tune
Advertisement:

At some point after all their attempts at taking over the world have failed, Pinky and the Brain end up forced out of Acme Labs when it gets torn down. To make matters worse, a man named Wally Faust is pursuing the mice so that he can use them in his own world domination schemes. While trying to escape Faust, the rodents end up in a pet store, where they — and a turtle named Mr. Shellbutt — are purchased by Elmyra Duff. Now stuck living in Elmyra's house, Pinky and The Brain continue planning their world domination schemes — provided, of course, they survive living with their new owner.

This crossover — which marked Warner Bros. Animation's final collaborative effort with Steven Spielberg until Animaniacs (2020) — came about at the request of Spielberg himself. The writers didn't like this one bit; Peter Hastings not only wrote an episode of the original series predicting the series' downfall because of the executives' demands ("You'll Never Eat Food Pellets in This Town Again"), but later left Warner Bros. to create Disney's One Saturday Morning. To no one's surprise, the fans agreed with the writers. Only five full episodes of Pinky, Elmyra & The Brain aired before Warner Bros. pulled the plug, and the remaining segments were aired as part of the compilation program The Cat&Birdy Warneroonie PinkyBrainy Big Cartoonie Show for a grand total of 13 episodes.

While many Pinky and the Brain fans believed the show would never receive a DVD release, Warner Bros. eventually proved them wrong with an eventual DVD release for the series in January 2014

The series has officially confirmed to be

non-canon, further stated in the Animaniacs revival where the Brain had spent the past 22 years creating his plan of modern internet in a gradually-remodeling Acme Labs.

Pinky, Elmyra, and The Brain contains examples of the following tropes:

Seldom-seem antagonist Christopher Walk--err, Wally Faust is usually accompanied by ominous Latin chanting...or at least as ominous as one can get when you're saying things like "gingivitis", "gluteus maximus", and "lactose".

Seldom-seem antagonist Christopher Walk--err, Wally Faust is usually accompanied by ominous Latin chanting...or at least as ominous as one can get when you're saying things like "gingivitis", "gluteus maximus", and "lactose".