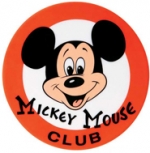 One of the most famous variety shows in American history, The Mickey Mouse Club initially aired on ABC from 1955 to 1959, and has since been reimagined several times.

The main show was made up of several sketches performed by the Mouseketeers, a troupe of child/teen performers led by the adult "Head Mouseketeer" Jimmie Dodd, who was assisted by "Big Mouseketeer" Roy Williams, and Bob Amsberry for the first two seasons. Each day had a central theme, such as Music or the Circus. Interspersed with the sketches were several serials, most famously one based on The Hardy Boys. Several of the Mousketeers later made it big, including Annette Funicello, Don Agrati (a.k.a. Don Grady of My Three Sons), Johnny Crawford (The Rifleman), Paul Petersen (The Donna Reed Show) and Dickie Dodd (a.k.a. Dick Dodd, drummer for The Standells of "Dirty Water" fame; no relation to Jimmie).

Like many classic Disney properties, the show was released as part of the Walt Disney Treasures line. One set includes the first week of the show, while subsequent sets included the serials Spin and Marty, The Hardy Boys, and Annette.

The first revival was The New Mickey Mouse Club, which aired in syndication from 1977 to 1979. The more famous second revival, The All-New Mickey Mouse Club, was produced for the Disney Channel and outlasted the original 1950s version, airing from 1989 to 1996. Like the original, it produced its share of future stars including Justin Timberlake, Britney Spears, Christina Aguilera, Keri Russell, Ryan Gosling, and JC Chasez.

While the Disney Channel revival was the last to air on television in North America, there's been a couple of international revivals: a one-season run in South Korea in 2015 hosted by Super Junior's Leeteuk, and a Malaysian version hosted by YouTube personality Charis Ow which debuted in 2017 and is still running. There's also an online revival which also debuted in 2017, available through Facebook