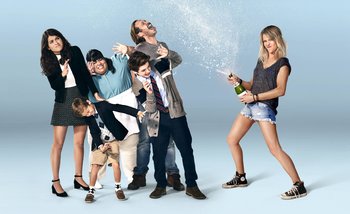 The Mick is a single-camera Dom Com starring Kaitlin Olson (It's Always Sunny in Philadelphia) as Mackenzie "Mickey" Molng, an irresponsible grifter who ends up babysitting her wealthy sister Poodle’s three spoiled kids indefinitely after Poodle and her husband are arrested by the FBI on fraud charges and subsequently flee the country.

Sabrina (Sofia Black-D'Elia), a high school senior, is a vain but insecure Alpha Bitch who sees her aunt as an obnoxious obstacle. Chip (Thomas Barbusca), the middle child, is a smug and entitled wanna-be sophisticate who is struggling for the respect he thinks he deserves. Ben (Jack Stanton), the youngest, is an adorable but precocious seven-year-old. Other characters include Alba (Carla Jimenez), the kids’ long-suffering maid, and Jimmy (Scott MacArthur), Mickey’s deadbeat not-boyfriend.

Olson serves as co-executive producer for the series, which was created by her fellow Sunny alum John and Dave Chernin. The show ran for two seasons on Fox, from January 1st 2017 to May 10th, 2018.