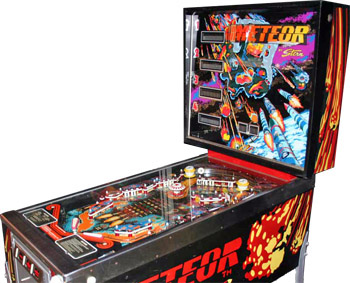 Meteor is an arcade pinball machine designed by Steve Kirk of Stern Electronics, with artwork by George Obregon. it was a tie-in to the 1979 disaster movie of the same name, and was released a month after the film's theatrical debut.

Like its namesake, Meteor requires the player to stop a five-mile-wide "meteor" from colliding with the Earth. This is done by firing three nuclear missiles at the menace; hitting a three-bank of drop targets for each missile advances it one step closer. Keeping all three missiles aligned lights WOW for all of them to increase scores, while spelling METEOR increases the bonus multiplier. Advancing all three missiles to the meteor gives the player a chance for a free game. The game also made good use of its solid-state design, resetting and remembering game states and drop targets for each player.