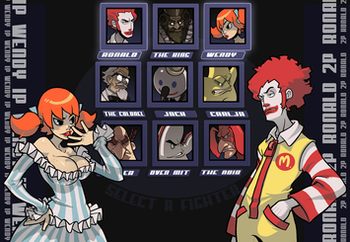 A particular Sub Genre of Fighting Game which brings together pre-established characters to have them fight each other. This is a common type of Licensed Game, especially for anime series. Many of these games are also a Massively Multiplayer Crossover, featuring characters who would never interact with each other in canon but belong to the same company.

Mascot Fighters are often targeted towards fans of the base universes from where the characters come from, who may not be hardcore fighting gamers. For this reason, these games have simplified controls and more casual gameplay compared to other fighting games in order to make them easy to pick up by fans who don't have much experience with fighting games (or with video games in general), and often fall under the genre of Platform Fighter.

Games of this genre include: