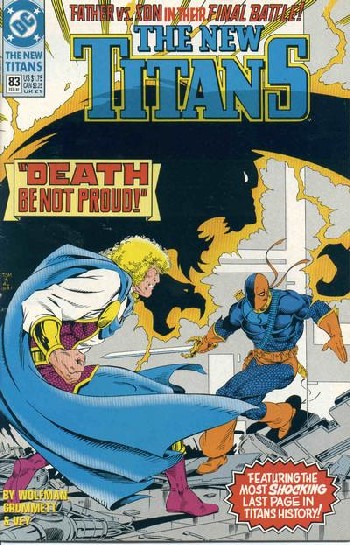 It seems there won't be a happy Christmas for the Wilsons this year...
Advertisement:

Titans Hunt was a loooong story arc of the Teen Titans.

It began when the Titans were about to celebrate their anniversary. None of them got to the party in time: the Wildebeest attacked and captured all of them. Not knowing what else to do, Steve Dayton hired Deathstroke to rescue the Titans. Deathstroke headed to Grayson's apartment, found the Wildebeest and... another Wildebeest? He managed to escape. Those two attacked Danny Chase, and killed him. Arella joined them, and things got increasingly complicated with two newcomers, Pantha (a savage cat girl) and Phantasm. All of them manage to break into the society of Wildebeests, and find Nightwing (who took the suit of the Wildebeest that tried to capture him, and infiltrated the society, until he was discovered) about to be killed by the main Wildebeest... who happens to be Jericho? Who can talk now? Who is now evil? Who can summon a soul self, like Raven? What the hell? And yet, he used his trademarked trick of getting inside and outside of people: it IS him.

The improvised team goes to Russia to rescue Cyborg, who was almost dead and repaired with outdated tech, and now he's a complete robot. Troia, who was out of town during the attack, joins them as well. The team returns to the base of the Wildebeest society, and the results were too complicated to enumerate. Let's just say that many people die at the end of the story.