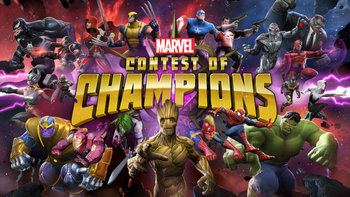 Marvel: Contest of Champions is a 2014 free-to-play mobile game developed by Kabam for the iOS and Android platforms set in the Marvel Universe. The player takes the role of an unseen Summoner for The Collector, who opens the game by abducting Wolverine for his contest and imprisoning him in a crystal.
Advertisement:

The game is a standard Mascot Fighter game that has several different modes, including a Story Mode, Duel (where players fight another player's top Champion) Arena and Alliance Modes, with special events frequently taking place. Each player's champions can be leveled up by using ISO-8, gold and catalysts, which are all gained when fighting in story quests and special events.

The game also has a comic tie-in set in the mainstream Marvel Universe that expands on several characters introduced in the game, such as Guillotine and White Fox.

In December of 2020, a sequel game, Marvel: Realm of Champions, was released, a 3-VS-3 MOBA-lite that details the original Champions’ self-founded civilizations struggling to fill the power vacuum left by the assassination of Maestro.