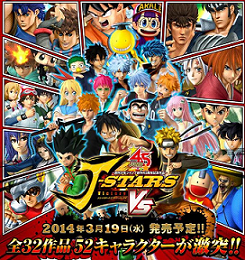 45 years of action and laughter!
Advertisement:

J-Stars Victory VS is an arena brawler akin to Anarchy Reigns and Gundam Extreme VS and is a Spiritual Successor to Jump Super Stars. The game was created by Bandai Namco Entertainment and Spike Chunsoft to celebrate the 45th anniversary of Weekly Shonen Jump and originally was code named Project Versus J. The game features 2-on-2 player combat where the player teams up with a friend or the computer to fight against an opposing team. Each team also has a third slot left for summoning a support character. There are other game types as well, like 1-on-1 with both players having supports, or 1-on-3.

A feature unique to J Stars Victory VS is its battle system. Each team has a three-part "WIN/Victory Gauge," with one segment filling up for each defeated opponent (defeated players respawn after a while). Along with this, there's a Victory Voltage gauge that fills as your team damages your opponents and depletes as your team takes damage. When the bar fills, the team can perform Victory Burst, and each member of the team gets a chance to perform a finishing move. There are also chargeable power attacks and area-of-effect attacks. Also, each character will have specific strengths and weaknesses. For instance, Luffy is strong against electrical attacks but grows weak in water.

Modes include a story mode titled J-Adventure, which lets the player explore a world that's an amalgam of Jump series and has 4 different playable plotlines; Victory Road, which has missions with a variety of different objectives to fulfill a la J-Universe in Jump Ultimate Stars; Free Battle modes for both online and offline, with up to 2 players offline and 4 players online; Gallery mode, where saved battle replays and character models and animations can be viewed; and the J-Shop, where you can purchase unlockable characters, upgrades for the Memorial Jump, and cards depicting characters in the game. These cards can then be used to power up playable characters, and groups of cards where the characters have some similarity provide a combination bonus, removing the cards' negative effects.

The latest trailer can be seen here.

The game is now out outside of Japan since July 2015.

A Spiritual Successor to J-Stars, Jump Force has been released on February 15th, 2019.