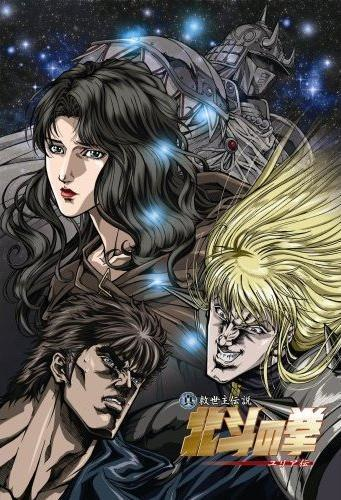 It's too late for you. You're already dead.note Omae wa mou shindeiru.
The year, 199X. The earth was engulfed in nuclear flames. The oceans have dried and the earth had split. It seemed as though all forms of life were annihilated. However, only humanity struggled to survive. The people waited for a savior who could bring light back to the desolate century's end.
— Opening Narration
Advertisement:

Fist of the North Star (北斗の拳; Hokuto no Ken, literally the "Fist of the Big Dipper") is the quintessential "man who looks and sounds like Bruce Lee, wandering the post-apocalyptic wasteland, making people explode with his fists and shedding loads of Manly Tears" manga. Essentially Mad Max and Violence Jack meets a Bruce Lee film, Fist of the North Star became a classic of the 1980s Shonen genre for Japanese manga, written by Buronson and illustrated by Tetsuo Hara. It lasted nearly six years in Weekly Shonen Jump with 27 collected volumes, is unquestionably one of the most influential manga ever penned, and to this day, has been subjected to many parodies, seen in sources such as My Bride is a Mermaid, Excel♡Saga, and School Rumble (but none as much as Bobobo-bo Bo-bobo).

The latter half of the manga, set several years after Raoh's defeat, has Kenshiro rejoining his former sidekicks Bat and Lin, now grown up and leader of the "Hokuto Army", as they fight off the corrupt Army of the Celestial Emperor (Tentei). While Kenshiro and his friends are successful in defeating their foes, Lin is kidnapped not long afterwards and taken to the Land of Shura, catapulting the successor of Hokuto Shinken into another war with the three warlords of Shura, all masters of Hokuto Ryuken ("Big Dipper Gemstone Fist"), a martial art which branched off from the same clan that developed Hokuto Shinken. While the Animated Adaptation ends with Kenshiro's final fight against Kaioh, the manga continues with a few additional story arcs involving Kenshiro's adventures into new frontiers with a young boy named Ryu.

Body counts are often in the dozens per chapter and any major fight is usually followed immediately by Kenshiro shedding Manly Tears and/or Tender Tears for the fallen, having discovered his opponent was noble all along or just misguided, even if he had been, for example, kidnapping children and laboring them to death in order to build a giant pyramid. Even in the rare event tears aren't shed, Death Equals Redemption abounds, and there's often plenty of exposition and lore revealed that revolves around the many nobler opponents Kenshiro happens to encounter or best in battle.

Despite the manga's popularity in Japan, it was only partially translated in English twice before both attempts were canceled: first by Viz Media during the 1980s and 1990s in a series of monthly comics, and later by Coamix's short-lived American subsidiary of Gutsoon Entertainment in the early 2000s as a series of colorized graphic novels. Viz was able to reacquire the license as of October 2020, and started publishing the series again as of summer 2021.

Kenshiro: ATATATATATATATATATATA! OWATTA! Hokuto Hyakuretsu Ken!!
Zeed: What was that? Your fists are just like mosquito bites! I'll Kill You!
Kenshiro: It's too late for you. You're already dead.
Zeed: What!? (pressure point activation noise) You gotta be kiddin' me! HIDEBU!! (explodes)
Feedback

Example of:
The Bartender