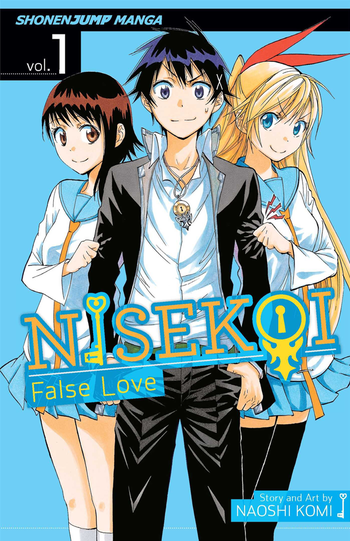 Nisekoi ("False Love") is a shonen romantic comedy manga by Naoshi Komi, which ran in Weekly Shonen Jump from 2011 to 2016 with a total of 229 chapters in 25 volumes.

Raku Ichijou is your Ordinary High-School Student. Rather he's as ordinary as he can be, not counting his status as the heir to a Yakuza family - a position he's not too happy about. Still, he lives a mostly carefree life until one day he crashes into (or, more precisely, is crashed into by) Chitoge Kirisaki - his class's new transfer student. This causes him to lose his most precious possession- a pendant given to him by his first love ten years earlier. Some harsh words are thrown and even though Chitoge eventually helps him find the pendant, the two of them are off to a bad start.

If that wasn't enough, a new gang shows up in town and start getting into fights with Raku's family - a conflict that could escalate into full-blown gang war. Through the power of coincidence, the gang's leader turns out to be not only Raku's father's old friend, but also Chitoge's dad! Together the two heads devise a plan to calm down their rowdy subordinates: Raku and Chitoge will have to pretend to be a couple! The two of them are not too happy about that, but agree to play along to avoid a bloody conflict.

Thus starts a story of love, lies, twists and promises. How long will Raku and Chitoge manage to fake their feelings? And how long will those feelings stay fake?

The manga was picked up for an English release by Viz Media, which ran in their English Shonen Jump anthology. An anime adaptation aired in the Winter 2014 Anime season, with a second season in the Spring 2015 Anime season. A live-action film released in Dec 2018.

Crunchyroll is streaming the anime, which can be viewed here,

Not to be confused with a shoujo manga called Nisekoi Doumei. It's also not an Isekai series.

Example of:
No Poker Face