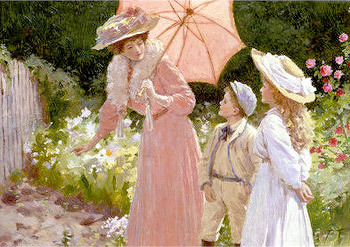 "[The perfect wife] was intensely sympathetic. She was immensely charming. She was utterly unselfish. She excelled in the difficult arts of family life. She sacrificed daily. [...] Above all, she was pure."
— Virginia Woolf, "Professions for Women"
Advertisement:

What is a Proper Lady? Also known as a "real lady", a "true lady", simply a "lady" or an "angel in the house", she's the perfect lady in the Victorian British mindset. The Proper Lady archetype was widely used in Victorian and earlier literature. Jane Austen was one of the first authors that introduced such qualities to heroines that did not fit into the strictest view of what is acceptable for a Proper Lady, beginning the slow death of this trope. The last time it was seen alive in the West in a 100% unironic form was around the 1950s into the 1960s. Modern ones are likely to be accused of being too pure or have some quirk or flaw that sets them apart from their predecessors.

A Proper Lady is a gentle yet strong being, incorruptible and pure as the driven snow, as unlike The Vamp as she comes, and Madonna-like in her virtues. She sacrifices herself for the good of her family, religion, and country. She is intelligent enough to smoothly run a household, and wisely spends her husband's money for the good of her family, never guilty of negligence or selfish frivolity. She possesses the wit, taste, and esprit necessary to be a star of Society, and never crosses the border of good taste and civility. She is devoted and loyal, never treacherous or scheming. Her manners are never less than impeccable, and her good will and charity are a beacon to those lucky enough to live around her. She is perfectly groomed, likely beautiful or at least comely (while the female antagonist will be more beautiful and appealing). However, more important than her personal looks is her gentle smile. Because small size is endearing (and allows for protective embraces from her lucky husband or fiancé), she will probably be on the shorter side. Chances are that she has dark hair and fair skin or blonde hair with blue eyes (but in a way that doesn't make her too attractive). Parasol of Prettiness is a typical prop.

A Proper Lady might not always be able to defend herself, but should in most cases possess the strength of mind to not panic, and the willpower to never give in to any vile demands.

She is always upper class in the original concept of the trope. Female protagonists from lower class background, like peasant girls, tend to follow the ladylike ideals and they are supposed to model their behaviour after her. Princesses might need to go through a humbling procedure before they can be Princess Classic. Proper Lady is nearly always married, often a mother. She might also be a redundant woman or a spinster, in which case she will not be bitter about never getting married, and will instead direct her motherly instincts for the good of her sister's or brother's family. Lower class women and maidens can have many qualities of a Proper Lady, and should, per this trope and the ideals behind it, aim to be as like her as possible.

There is no upper age limit to being a Proper Lady. Widowed ladies might easily double-qualify as Determined Widows. If a lady dies at an advanced age, her death will be dignified, probably caused by old age, and if she dies young (of nothing too unsightly), it will be a heartbreaking — but not in vain — tragedy. Her absence will leave behind a great void and she will be dearly missed by not only family members and friends, but also by those who only occasionally had the fortune to be graced with her presence.