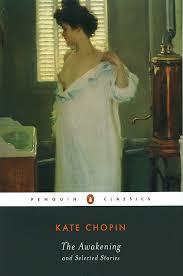 A 1899 novella by Kate Chopin about Edna Pontellier, a married Victorian mother who experiences an awakening of her sexuality and creativity while vacationing on an island with her husband.

This begins when she meets a young man named Robert and develops an affection for him that is well beyond any love she feels for her husband. As the vacation progresses she becomes more and more distant from her husband and children, doing things like sleeping in a hammock rather than in bed with him and spending all day painting. Even after the vacation ends, Edna is a changed woman and cannot let go of what she discovered. The revelations about herself and her marriage cause her to question Victorian gender roles and the life she feels like she has unquestioningly walked into.

While the novella did receive some favourable or even rapturous contemporary reviews, it alienated conservative critics at the time and developed a somewhat scandalous reputation. Chopin continued writing until her death some five years later, but sometimes had difficulty finding publishers, and much of her later work was not published until long after her death (bearing particular mention is her short story "The Storm", which is both one of earliest known examples of English-language erotica by a female author and even more subversive in its content than The Awakening). By The '60s and The '70s, her work underwent a re-evaluation courtesy of feminist critics and scholars, and the novella has since been canonised as a masterpiece of American literature and has been in print ever since.

It has sometimes been compared to Madame Bovary (Gustave Flaubert) and Anna Karenina (Leo Tolstoy).