Literature / The Art of Racing in the Rain 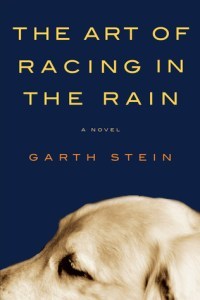 To say I am alive, I am wonderful. I am. I am. That is something I aspire to.
Advertisement:

The Art of Racing in the Rain is a 2008 novel written by Garth Stein.

The story concerns Denny, an aspiring racecar driver. He meets and marries Eve, a bubbly, happy young woman. Together they have a daughter, Zoey. Things go well for the family for about six years before Eve unexpectedly dies from cancer. Denny is then forced to battle Eve's parents for custody of Zoey, all while trying to balance his burgeoning career and several unexpected legal troubles.

What makes the book unique is that it's not the told from Denny's perspective, or Zoey's, or even Eve's parents. The narrator is actually Enzo, Denny's dog. He provides commentary on the events as they happen and offers a unique perspective only a dog can provide. Along with Denny's main plot is Enzo's subplot about the belief that if he's prepared enough, he'll return after he dies as human.

It remained a bestseller on The New York Times for three years straight. Stein has written two other versions of the book: a YA adaption for elementary/middle school students, and a picture book for young children.