Literature / The Art of Starving 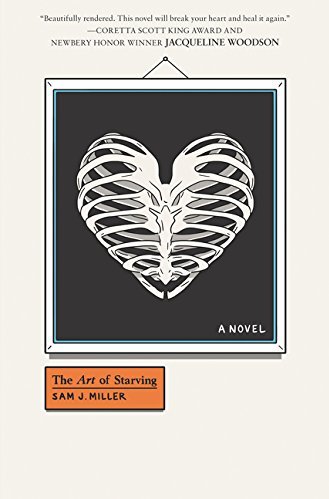 ''"Congratulations! You have acquired one human body. This was a poor decision, but it is probably too late for you to do anything about it. Life, alas, has an extremely strict return policy.
Not that I’m some kind of expert or anything, but as an almost-seventeen-year veteran of having a body, I’ve learned a few basic rules that might save you some of my misery. So I’m writing this Rulebook as a public service. Please note, however, that there are a lot of rules, and some of them are very difficult to follow, and some of them sound crazy, and please don’t come crying to me if something terrible happens when you can only follow half of them."''
Advertisement:

The Art of Starving is a young adult science fiction/fantasy novel by Sam J Miller.

Matt's life is a complete mess. He's bullied at school for his sexuality; he finds himself desiring the same bullies who make his life a living hell while also envying them for the bodies he could never have; his single mother is on the brink of losing her job and to top it all off, his older sister Maya has recently run away from home and won't tell him why. The only thing Matt has some control over is his own body -specifically, the ability of denying it food.

But don't worry-it's not like he has an eating disorder or anything. It's not that big of a deal. Starving himself clears his mind, makes him sharper and seems to have unlocked superpowers, like the ability to see things he shouldn’t be able to see, the knack of tuning in to thoughts right out of people’s heads and maybe even the authority to bend time and space... All of which he'll need to infiltrate Tariq's inner circle and uncover the truth behind Maya's disappearance and maybe exact revenge on those who had hurt him and his loved ones.

However, Matt will soon learn that controlling someone's hunger is not as easy as it seems and that food isn't the only one.