Film / A League of Their Own 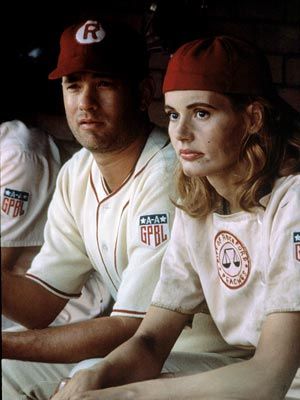 It's World War II, and all of the biggest stars in Major League Baseball have left the field of play. Something has to be done to keep the stadiums full, the people's morale up, and profit coming to the owners of the league and their business partners. One man's solution: Create the All-American Girls Professional Baseball League

. This is their story.

A League of Their Own is a 1992 Dramedy directed by Penny Marshall, starring Geena Davis, Lori Petty, and Tom Hanks, with major supporting roles by Madonna, Rosie O'Donnell, Jon Lovitz and Penny's brother Garry Marshall. It is a fictionalized telling of the founding of the aforementioned baseball league and its struggles to stay relevant after the war ended. The main focus is the Rockford (Illinois) Peaches, headed by drunkard former baseball player Jimmy Dugan, and Kit and Dottie, two sisters who join the team.

Not to be confused with the British sports panel show of the same name.

"Yesterday, it might've been a ball. Tomorrow, it might be a ball. But today, it's a strike!"