All spoilers regarding the first 159 chapters are unmarked. You Have Been Warned! 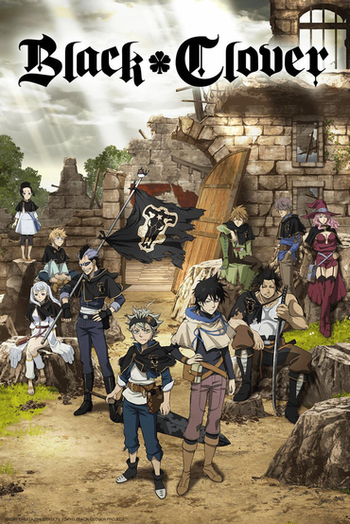 "Surpass your limits!"
"Humanity came close to being decimated by the demons. But just one mage saved humankind. He was known thereafter as the Wizard King and became a legend."
— Opening Narration
Black Clover is an action fantasy manga by Yūki Tabata that has been serialized in Weekly Shōnen Jump since February 16, 2015. It takes place in a world where mana and magic reign supreme, and focuses on the Clover Kingdom. There is one man in the kingdom whose magic power is unmatched, and thus, he's known as the Wizard King. However, this is not his story. Rather, this is the story of Asta, a young man from the countryside who, along with his best/childhood friend Yuno, compete with each other to become the next Wizard King. The only problem is that unlike his magic prodigy of a friend Yuno, Asta possesses no mana, and despite all his
Advertisement:
physical training, he cannot compensate for his lack of magical abilities.

This all changes during the ceremony in which everybody receives their own grimoire, which are used to focus and enhance the user's magic. While Asta receives nothing, Yuno receives a super-rare four-leaf clover grimoire, the same type used by the first Wizard King (most people receive three-leaf grimoires). Later, Yuno's attacked by a thief who's hoping to steal his grimoire, but Asta, in the process of protecting Yuno, receives a five-leaf, black clover grimoire that contains an Anti-Magic sword inside. After defeating the thief, Asta continues his promise with Yuno of not stopping until one of them is the Wizard King.

Black Clover is the second major serialization by Tabata, whose first major one, Hungry Joker, was cancelled because of lack of popularity, despite its good reception with readers. Black Clover, unlike its predecessor, has been able to acquire a large number of readers. It is localized by Viz Media and the English version of Shonen Jump. As of present, the story spans 331 chapters and is currently on hiatus in preparation for its Grand Finale.

Following the release of an OVA, it received an anime adaptation by Studio Pierrot, which aired from October 3, 2017 to March 30, 2021. A SimulDub of the series was produced by Funimation. The anime adaptation began airing on Toonami on December 2, 2017. On March 28, 2021, it was announced that the series would receive an anime film.