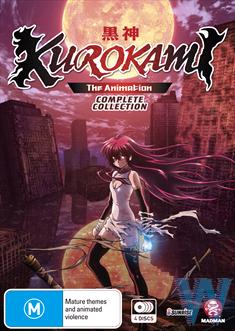 Black God (JP:Kurokami) is a manga created entirely by the manhwa team led by both Dalyoung Lim (story) and Sung-Woo Park (art).

Have you ever seen someone who looked a lot like you and determined "Hey! That's my doppelganger!"? Well, imagine if that person was a part of you. And imagine if, after making contact with that person, you'd die the next day. Oh, and also, it's called a "doppeliner".

Keita Ibuki is either a struggling computer programmer or an Ordinary High-School Student, depending on whether you're reading the manga or watching the anime. Anyway, he takes pity on a hungry girl named Kuro and gives her some free ramen, earning her gratitude. It turns out that Kuro is a Tera Guardian, a being meant to protect the balance of existence. After Keita is injured by a Tribal End (an evil human), Kuro switches hearts with him, linking them forever...

The anime adaptation by Studio Sunrise aired from January 8, 2009 to June 18, 2009. It uniquely aired on both Japanese and American TV at the same time, with an English dub (produced by NYAV Post) being produced for the U.S. broadcast, making it one of the earliest (if not first) examples of simuldubbing before it was popularised by Funimation. The series was licenced and released by Bandai Entertainment before their closure and has since been rescued by Sentai Filmworks.