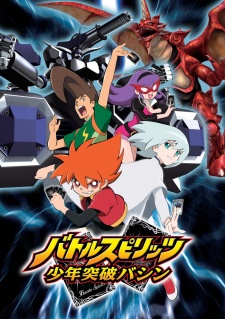 The first anime inspired by Bandai's Battle Spirits trading card game. It premiered in Japan in 2008 as part of TV Asahi's Sunday Morning Kids block. There was also a manga series serialized in Kero Kero Ace about about the same time. The anime was Lighter and Softer than both the manga, and its successor, Battle Spirits Shonen Gekiha Dan.

The series focuses on Toppa Bashin, a 12-year-old Idiot Hero in love with Battle Spirits. Of course, his favorite attribute is red. He goes through daily school life and battles his friendly rivals J, Striker and Suiren. It's a slice of life series, with very little ongoing plot, but things do get more serious at about the half way point.

Also see Battle Spirits Heroes for the 4th series in the franchise.