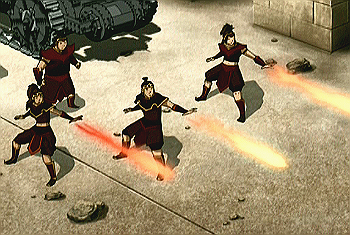 Now that's a firing squad.
"If it's any consolation, they look like cheap knockoffs."
— Nomad, commenting on enemy Nanosuit soldiers in Crysis
Advertisement:

So the heroes are mowing through your legions of Mooks like they were nothing. Even your Giant Mooks and Elite Mooks barely slow them down for more than a couple seconds. You see, the heroes have an edge that not even your best Elite Mooks can hope to match... not only are they better fighters, they're also fighting on a whole different level than your minions. Maybe they're Jedi skilled in The Force, or they see the world in bullet-time and wear superpowered nanotech suits. Maybe they have a gravity gun, grappling hook pistol, or some other special weapon your troops have no equivalent of. Perhaps your enemies are straight-up superheroes, or they could just be average guys who only win because your Mooks are blind, deaf, mentally impaired or physically challenged.

Any way you cut it though, no matter how much firepower your mere mortal Mooks try to bring against them, they'll simply be completely outmatched, with the heroes often being a full class or more higher than them in Super Weight. Sure, you've got your Quirky Mini Boss Squad or The Psycho Rangers, who have powers of their own, but you have only five or six of them at most, and they can't be everywhere at once. What you need are Mooks with some sort of special abilities (preferably similar or identical to the hero's). Enter the Superpowered Mooks.

These guys are equipped with the same or similar powers as the heroes, but produced in large enough numbers that you can use them as elite infantry and field several at once, rather than (as with a Quirky Mini Boss Squad member) merely tossing one out as an end-of-level Boss encounter. This allows you to outnumber the heroes while simultaneously fighting them with their own tricks! There's no way it can possibly fail! Unless, of course, that pesky Law Of Conservation of Ninjutsu pops up... and let's not even think about the inevitable drop in quality of these Evil Knockoffs due to mass production, or the effect it will have on their physical and mental stability.

Not to be confused with video game mooks that are just unreasonably powerful. Distinct from Elite Mooks in the fact that while elite Mooks are merely just a more powerful kind of enemy compared to regular Mooks, their power does not necessarily come from similarity to the hero's capabilities.

Larger-than-average and packing psychic powers to boot, a single Retainer utterly trounces Hank in his latest trip to Hell.

Larger-than-average and packing psychic powers to boot, a single Retainer utterly trounces Hank in his latest trip to Hell.