Comic Book / Our Worlds at War 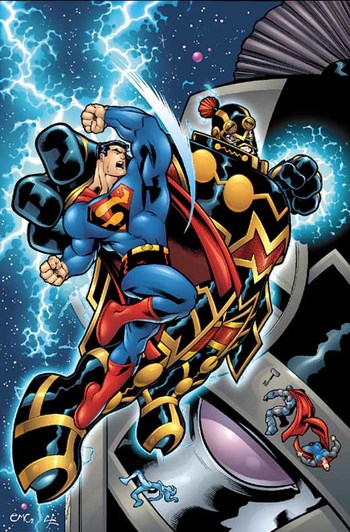 Our Worlds at War (2001) was a DC Crisis Crossover that brought nearly every hero and team, and a few villains, together to stop an entity known as Imperiex, whose stated goal was to destroy the entire Multiverse in order to start a new, "perfect" universe (apparently the existing Universe had some strange flaw that bugged the crap out of him, so of course destroying it all and starting over was the best solution). Having already destroyed several worlds, Imperiex heads straight for Earth, which as it turns out, is a literal Cosmic Keystone which holds the entire multiverse together. So alien refugees from all over the cosmos head to Earth to make a final stand.

Superman, being the primary character of the event, is forced to set aside his enmity against then-President Lex Luthor, General Zod (who ruled an Eastern European nation) and even Doomsday and Darkseid in order to combat this cosmic threat. Superman's greatest challenge wasn't simply physical (Each Imperex "Probe" was 8 feet tall, stronger than Superman, invulnerable, and if it did have its armor pierced, it would detonate with the force of an atomic bomb), but emotional. Superman could only watch as allies and family became wounded (Half the Justice League of America), were killed (Wonder Woman's mother, Steel, Aquaman, many others), went missing (Superman's parents both presumed dead during the arc), and even stood by helplessly as Lois Lane went sobbing into Luthor's arms when her father died in a kamikaze blitz while defending the White House.

The crap really hits the fan when Imperiex is defeated (wait for it)... and Brainiac appears, absorbs Imperiex's immortal essence, becoming a Physical God, and sets upon absorbing the entire universe (instead of destroying it). Turns out Brainiac had orchestrated the entire scenario (including using Lex Luthor's daughter to guide him into doing everything that had to be done to destroy Imperiex), and with all the universe's defenders dead, defeated or at the very least severely weakened, nothing would be able to stop him...

This Crossover contained examples of: