From a Single Cell 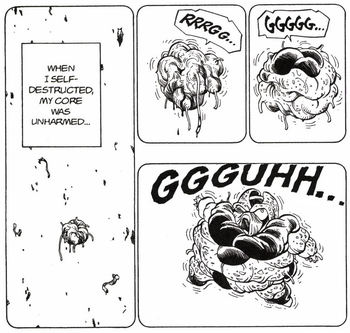 Not quite one single cell, but it is one single Cell...
"I don't remember much after the explosion, but somewhere amongst the planetary debris the core of my being still existed, one living cell survived, and that is all I needed for my regeneration... Soon that living cell began to multiply into many, it wasn't long before I became conscious of my transformation, I could feel every part of my body growing, crackling with new life and energy. My shapeless mass began to sprout new limbs, first my legs, then my arms, and in no time, my whole body was restored! [...] That is when I realized that each cell must hold a memory of my former self. Each one programmed to make me whole again."
— Cell, Dragon Ball Z, having just survived his own Planetary Taking You with Me thanks to this trope.
Advertisement:

The worst kind of unkillable enemy, there's the creature who cannot be mortally wounded, because he has a Healing Factor that is exaggerated. Every injury simply regenerates, from lost limbs, to a blown off torso, to a broken neck. Even when you think you've completely killed him, he comes back, because you missed a bit of flesh that was able to replicate itself into a new body.

This is rarely an ability of the hero; it is more often a power a villain has that marks him as being too powerful and resilient for the heroes to overcome, forcing them to find a creative way to beat the villain or gain a Plot Relevant Power Up.

If not properly explained, or given to a character who doesn't really seem worth it, it can become an Ass Pull. No matter how well done, it will have audiences (and characters themselves) screaming "Why Won't You Die?!"

Why every loose cell or drop of blood shed by the character doesn't generate a copy of them is not generally addressed. In a supernatural setting this can be handwaved with some talk about souls or lifeforce, though one still wonders how the various bits go about deciding which one of them gets to do the regeneration. Bonus points if the character/creature in question somehow retains all of his memory and personality, which in real animals are stored in the brain - no brain, nothing to restore all that data from!

Also, per mass-energy conservation, this process should either require some sort of mass to absorb and convert into new cells, or a lot of energy to convert to mass.

Expect this from all sorts of enemies, from demons, aliens, to androids made of Nanomachines.

A form of Nigh-Invulnerability. A character with a sufficiently strong instance of this trope and The Ageless has Complete Immortality. See Shapeshifter Baggage and the necessary Genetic Memory. Also see Good Thing You Can Heal and Immortal Life Is Cheap. Related to Pulling Themselves Together.