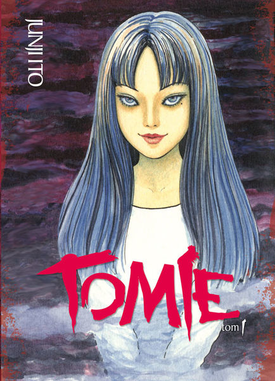 Tomie is a horror manga by Junji Ito that predates the well-known Uzumaki and The Enigma of Amigara Fault.
Advertisement:

Tomie is an unusually beautiful girl marked by a distinctive mole below her left eye. Structured as an anthology, the manga revolves around Tomie as she starts a new life in one city after another, influencing new people, making new friends... and new enemies...

It becomes evident that Tomie is an incredibly unpleasant person who seems to exist only to torment others. But the problem is that not even death can bring her down. And it's been tried. Several times. As the series goes on, the full extent of Tomie’s mysterious powers are unveiled, and it eventually turns out that with every death, duplicates begin to appear...

Films in the series
Advertisement:

The franchise encompasses a 3-volume manga, nine feature films (one of them being a spliced-together, short-lived TV drama released as a feature), and some additional media and merchandise. A hardcover omnibus version of the manga was released in late 2016.