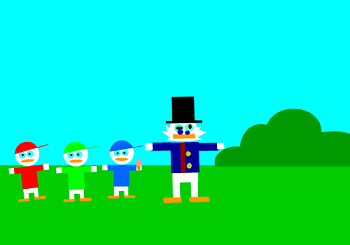 Ducktalez is a flash and 3D animation series by Chris Ushko. A parody of DuckTales, the animations, which have crudely drawn versions of Scrooge, Huey, Dewey, and Louie, and others, and a badly drawn Duckburg, started as an animation test. However, when more animations were made, the quality of the animation and 3D got better, but the crude drawings of the characters and setting stayed the same, even when rendered in 3D.

Animations can be found here: