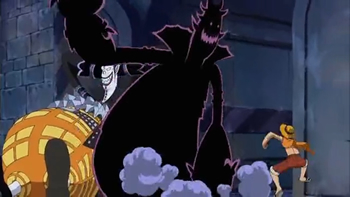 Some like to use this trope literally.
"I'm human! She's just a pissy cloud!"
— Anya, Anya's Ghost
Advertisement:

So you think you're hot stuff, eh? You actually did it, you punched out Cthulhu. You drove the Hit Points of that Physical God, Demon, or Eldritch Abomination down to zero, and it vanished.

Unfortunately — he's coming back. You see, what you killed was only part of him. The physical part that was inhabiting our universe at the time. His reappearance isn't coming Back from the Dead. It's regrowing a fingernail. This is how Powers That Be can occasionally take things into their own hands without breaking Da Rules.

This isn't to say there wasn't some accomplishment here. At the very least, he's gone for now. In some cases this can mean peace for years. And in some...days. Better spend that time researching a way to make him Deader Than Dead or at least find a way to seal him in a can so that he can't rise again to threaten the world.

Sometimes, especially in Video Games, you aren't even that lucky. This can be used as a variation of Hopeless Boss Fight so that The Battle Didn't Count, or Heads I Win, Tails You Lose. A very difficult boss that you aren't expected to defeat is presented to you. If you lose, the plot goes on with your loss, but if you win? "HAHAHA! That was only my shadow!", and then the real boss waves his hand, and you lose, anyway.

On the other hand, in most Tabletop and Video Games, you do this all the time, as from the perspective of the gaming world you are effectively a being from a higher dimension that has created / taken possession of a character to go on adventures / rampages, and no matter how gruesomely or thoroughly your character may be maimed or destroyed, it is impossible for anyone or anything in-game to physically harm the real you at all and you can return to life as your gaming avatar (or a completely different one) in a matter of seconds if you so desire.

There are four main types:

Not related to (but sometimes achieved by) Casting a Shadow, and definitely not related to Loving a Shadow. Also see: As Long as There is Evil, Soul Jar, Possessing a Dead Body. The inverse of this trope is Synchronization where killing one part kills the rest. Compare Actually a Doombot, Worf Had the Flu, Backup Twin, Cloning Gambit, and Robot Master, Decoy Getaway and Faking the Dead.

This is partially a death trope; examples may be spoiler-y.