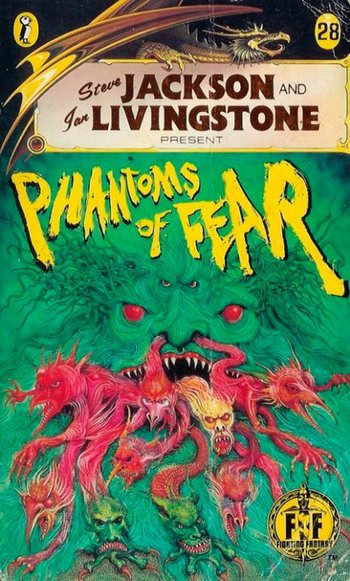 Phantoms of Fear is the t28th entry in the Fighting Fantasy series of gamebooks, written by Robin Waterfield.

You are a Wood Elf from Affen Forest, but no ordinary elf: your father was a great warrior, your mother a powerful shaman, and as their son, you are a gifted warrior capable of wielding magic and the power of entering the Dream World, typical of shamans. Your powers and connection to the Dream World earned you the title of Eldenurin, the "Defender-Shaman of the Tribe", and now your powers are required to save Khul from evil. In your dreams you sense the threat of the diabolical Prince Ishtra, one of the Snake Demons, who's building a secret invasion force in the depths of Affen Forest itself, corrupting the land. With your arsenal of spells and your enchanted sword Telessa at your side, you must brave the chaotic forest, infiltrate Ishtra's Pit and find a way to defeat the Demon Prince and his terrifying minion Morpheus, master of Nightmares.

The book is overall original thanks to some characteristics of your character, including the ability to journey into the Dream World using Power points, which can help you avoiding some dangers, or make things even harder for you. Notably, while its plot also involves collecting vital artifacts for the finale, an alternative solution is offered.

Phantoms of Fear provides examples of: