Film / In the Name of the King 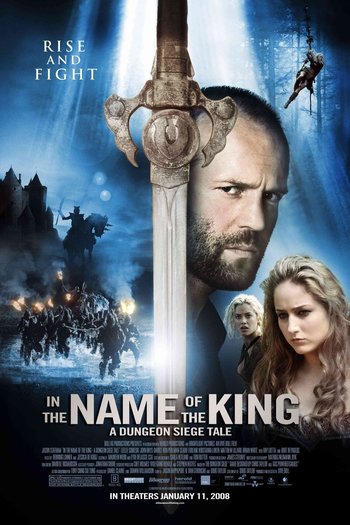 In the Name of the King: A Dungeon Siege Tale is a 2006 fantasy film directed by Uwe Boll, inspired by the Dungeon Siege video game series. It was produced by Brightlight Pictures and distributed by Freestyle Releasing and Vivendi Entertainment in the United States and Canada. 20th Century Fox took distribution overseas. It premiered at the American Film Market on November 3, 2006. It was released in Germany on November 29, 2007 and was released in the United States on January 11, 2008.

Set in the kingdom of Ehb, the story follows a man called Farmer (Jason Statham), an orphan who was adopted by the village. When Farmer's wife, Solana (Claire Forlani), and his son leave to sell vegetables at the town of Stonebridge, his farm is attacked by creatures called Krug. With the help of his friend and mentor, Norrick (Ron Perlman), he fights off the Krug and travels to Stonebridge. However, the Krug kill his son and capture his wife. Accompanied by Norrick and Bastian (Will Sanderson), his brother-in-law, Farmer intends to find and rescue his wife.

The Krug are being controlled by the wizard Gallian (Ray Liotta) who is amassing an army to overthrow King Konreid (Burt Reynolds), with the assistance of the King's nephew, Fallow (Matthew Lillard).

This film marks the one and very likely only time Hong Kong veteran action choreographer Ching Siu-tung would work on a video game movie, and his Wire Fu effects are notably evident in the forest battle scenes and the final fight.

In The Name of The King provides examples of: