Film / In the Valley of Elah 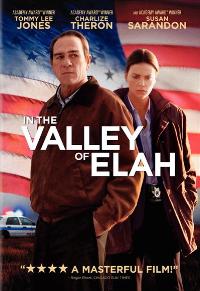 In the Valley of Elah is a 2007 drama written and directed by Paul Haggis and starring Tommy Lee Jones, Charlize Theron, and Susan Sarandon. The film follows Hank Deerfield (Jones), a former MP whose son goes AWOL shortly after his company returns from Iraq. Knowing how much stress his son was under, Hank decides to drive to the base and try to find his son himself. Not long afterwards, however, he discovers his son has been murdered, and finds himself working with a local police officer (Theron) to investigate.

This Film Contains examples of: