Film / In This Our Life 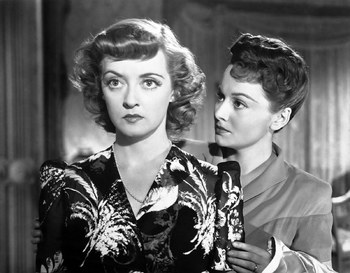 Guess who's the heartless one.
Advertisement:

In This Our Life (1942) is Warner Bros. drama film directed by John Huston, starring Bette Davis, Olivia de Havilland, George Brent, Dennis Morgan, and Charles Coburn. It was adapted from the Pulitzer Prize-winning novel of the same name by Ellen Glasgow.

The film begins with Stanley Timberlake (Davis) smooching with her own sister's husband Peter (Morgan), even though she herself is engaged to Craig Fleming (Brent). Stanley and Peter run away together, leaving Roy Timberlake (de Havilland) distraught, but things soon turn sour for the homewrecking pair.

As for Roy and Craig, they get very close due to their mutual loss and find themselves on the verge of marriage. Unfortunately, Stanley soon comes to ruin their happiness.

In This Our Life shows the following tropes: