Film / Report from the Aleutians 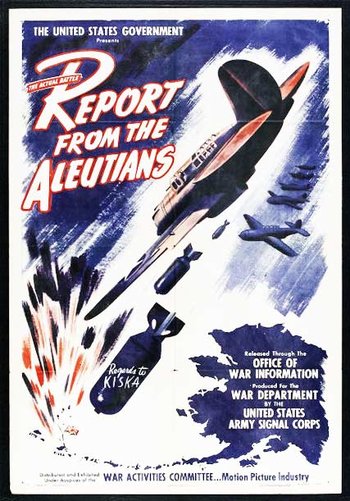 Report from the Aleutians is a 1943 documentary feature (technically a "feature" at 47 minutes long) from John Huston, then in wartime service with the Army Signal Corps.

It is a documentary about the Aleutian Islands campaign, specifically, the U.S. Army Air Force base on the island of Adak. Opening narration explains just what the heck the Aleutian Islands are—a long chain of volcanic islands that extend out a thousand miles from the Alaskan mainland—and recounts the Japanese attack on the American base at Dutch Harbor, and the Japanese occupation of the islands of Attu and Kiska near the end of the chain. The United States responded by building a base on the island of Adak, further west than the Dutch Harbor base. Huston's crew films the daily lives of the soldiers at the Adak installation, concentrating on the boredom and tedium of life on a remote, windswept, treeless outpost. Finally the film ends with a combat mission to Kiska, showing nine bombers dropping their bombs on Japanese installations on the island.

Not long after this film was completed, the Americans took back Attu and Kiska, the former after a vicious 18-day battle that saw the Japanese garrison annihilated, the latter with no battle as the Japanese had already evacuated.

Compare Huston's other World War II documentaries, The Battle of San Pietro and Let There Be Light. Also see William Wyler's The Memphis Belle, a similar documentary about an American bombing squadron in the European theater.