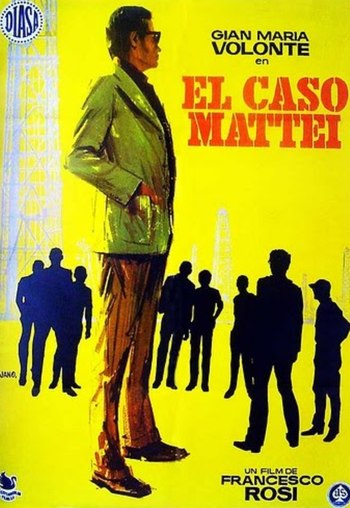 The Mattei Affair (Il caso Mattei) is a 1972 film from Italy directed by Francesco Rosi.

It is a biography of Italian bureaucrat and administrator Enrico Mattei

. The film starts in 1945, right after the end of World War II. Mattei (Gian Maria Volonté) is put in charge of the Italian state-owned oil company, Agip, with the expectation that he will sell it off. However, Mattei resists pressure to sell Agip and its Italian oil assets to an oil conglomerate for pennies on the dollar. Instead, he preserves and builds Agip, an effort that is helped along in 1949 when Mattei and Agip discover rich reserves of natural gas in the Po River valley of northern Italy.

" oil conglomerates that dominate oil extraction and refining in Africa and the Middle East. Mattei begins to make lots of enemies among the Seven Sisters as well as among the governments of countries like the United States and France that are basically owned by the Seven Sisters.