Film / Across the Pacific 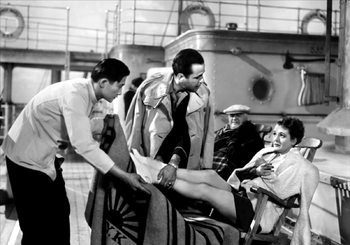 Across the Pacific is a 1942 film directed by John Huston and an uncredited Vincent Sherman.

The movie opens on November 17, 1941. Captain Rick Leland (Humphrey Bogart), an artillery officer in the U.S. Army, receives a dishonorable discharge for embezzling funds. He goes to Canada, because Canada's at war, but they know about his past and reject him. Resolving to offer his services to Nationalist China, also at war, he boards a ship in Halifax, bound for the Panama Canal and thence to China.

As it happens, it's a Japanese ship with a Japanese crew. On that ship, he meets some interesting people. There's Alberta Marlow (Mary Astor), a lovely Canadian woman who immediately hits it off with Rick. Also on the ship is one Dr. Lorenz (Sydney Greenstreet), a businessman who is going back to East Asia, where he's spent most of his life. Dr. Lorenz is an aficionado of Japanese culture, speaks fluent Japanese, and has a Japanese servant. Lorenz starts asking Rick questions about his grudge against the Army, then more pointed questions about his service in the Panama Canal Zone, and the American defenses there. It eventually becomes clear that Lorenz is a spy for the Japanese, part of a plot to make an attack on the Panama Canal, should war break out—but surely it won't?

What Lorenz doesn't know is that Leland's court-martial and dishonorable discharge were a ruse. In fact, he is part of a counter-intelligence operation meant to ferret out just what Lorenz and his ring of Japanese spies are up to. What Leland doesn't know is just why Alberta Marlow is on the boat, and whether or not she is connected to Lorenz's plot.

John Huston left the production after he joined the Army with the breakout of war. Huston spent the war making Army documentaries and wouldn't make a Hollywood feature again until The Treasure of the Sierra Madre in 1948. Richard Loo plays Miyama, one of the Japanese bad guys.