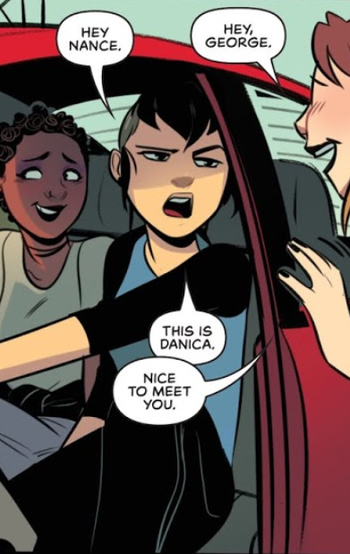 Mama Jacobs: What did you say your name was? Brandon? Butch?
Charlotte "Chuck" Charles: Chuck?
Mama Jacobs: Chuck! I knew it was something unladylike.
— Pushing Daisies, "Girth"
Advertisement:

Basically, a girl or woman has a boy's name (or nickname). Frequently used to indicate some form of masculinity, boyishness or spunk in the character. If the name is a nickname, she may insist only on being called this name and resent being addressed by her "real" name. If not, expect the character to be very feminine and lament her name.

One commonly offered explanation for a girl having one is that her parents Wanted a Son Instead.

Many Japanese names are equally appropriate for men and women; tomboyish characters will frequently have one of these. At least two characters named "Megumi" were once boys, for example.

If the character is appearing for the first time, the others may have Pronoun Trouble, where everyone expects this Charlie Somebody person to be a guy, and are surprised when she isn't.

This can become An Aesop if said Charlie Somebody is in a traditionally male-oriented profession; for instance, the Step by Step episode where J.T. immediately dismisses female mechanics, before handing his car over to "Sam", who is apparently the best mechanic in town. The message can quickly get Anvilicious if done more than once in a series.

Sometimes a variation of the Embarrassing First Name. It can potentially lead to Actually, I Am Him, and a good way to help disguise the fact that Samus Is a Girl until the right moment. The Super-Trope is Gender-Blender Name. Related to Moustache de Plume, when a woman writer adopts a masculine Pen Name.

This is a language-dependent trope: it's rather common in languages like English, but in others, it is impossible to do. For example, in Spanish most names have explicit masculine and feminine forms (and those that don't are either exclusively male or exclusively female), so this trope can't be used without it becoming extremely strained, to say the least.

One genre that is RIPE with this trope involves shows where a female is in an occupation that is typically considered a man's job (female cops, firefighters, soldiers, etc.). One of the most common is contrasting the incredibly girly Mackenzie with the very masculine nickname Mack.