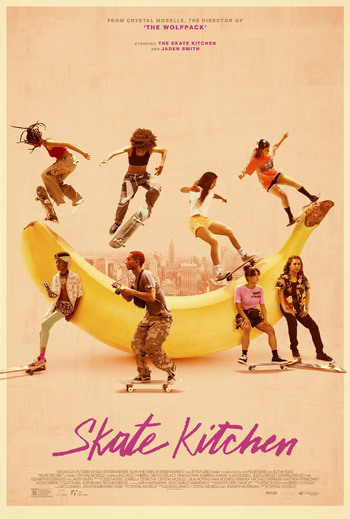 Skate Kitchen is a 2018 Coming of Age drama film directed and written by Crystal Moselle. It is her first feature film and second major release, following the documentary The Wolfpack.

The film had its premiere on January at the 2018 Sundance Festival, and it was picked for a theatrical release in August.

It tells the story of Camille, a teenage girl from Long Island who enjoys skateboarding (and is pretty good at it), but has no friends of her own to share her passion. She then goes to New York City to meet the all-female crew Skate Kitchen during one of their sessions, and is warmly welcomed into their group. In New York, she not only lives her desire to do what she loves, but also goes through exciting experiences of young life alongside her new friends.

In a case of Based on a True Story, the Skate Kitchen is an actual skateboarding crew in which Crystal Moselle found inspiration for the movie. The main cast is almost entirely formed by its members, although they play fictional versions of themselves.

A TV series based on the film, Betty, by HBO began airing in 2020, with most cast members reprising the roles they had. Its second season aired in 2021.