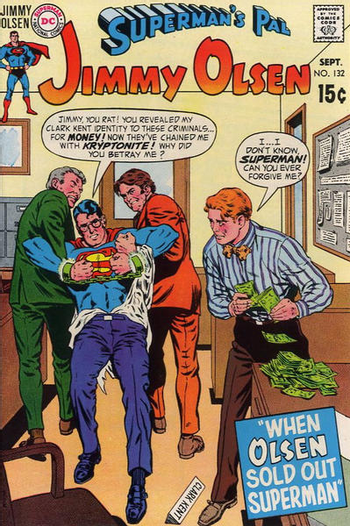 "When Judas, who betrayed him, saw that Jesus was condemned, he was seized with remorse and returned the thirty pieces of silver to the chief priests and the elders. 'I have sinned,' he said, 'for I have betrayed innocent blood.' 'What is that to us?' they replied. 'That's your responsibility.' So Judas threw the money into the temple and left. Then he went away and hanged himself."
— Matthew 27:5, The Bible
Advertisement:

Sometimes, after a traitor makes their Face–Heel Turn, they might, after some time, regret their treachery. The reasons for this may be that things didn't quite go according to plan, they realized that Being Evil Sucks, they were Forced into Evil, Trapped in Villainy, or maybe fate forced them to betray their allies. Whatever the cause, a Regretful Traitor is likely to apologize later on or in rare cases, even ask for forgiveness from their former allies. However, their former allies may not be ready to forgive them so soon.

Compare with Heel–Face Door-Slam, where a villain regrets the wrong they've done, but it's too late for reform. Related to Heel–Face Turn, where a villain (though not necessarily a traitor) joins the good side. Subtrope of Heel Realization and My God, What Have I Done?.

Due to this trope dealing with traitors, be wary of unmarked spoilers.