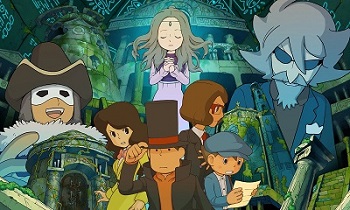 The sixth game in the Professor Layton series, third in the prequel series. It is also, according to Word of God, the final game in the series to feature Layton himself; though not the last game overall.

Layton receives a letter from professor Desmond Sycamore, who requests his help in solving a mystery he has stumbled upon: the identity of a young girl who was frozen in ice for millions of years but is inexplicably still alive. The girl is the key to solving the mysteries of the ancient Azran civilization, and it becomes clear that Layton and his friends aren't the only ones who are interested in doing so...

A first to the series, instead of remaining in a single locale or two, players are tasked to travel around the world to visit other locations connected to the main plot, all of them holding their fair share of puzzles and mysteries to solve the biggest mystery of the Azran Legacy.