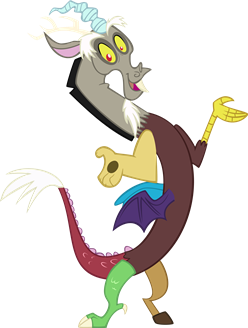 This dopey-looking, but intelligently sneaky and mischievous, draconequus is the spirit of chaos and disharmony. He once wreaked chaos on Equestria until Celestia and Luna discovered the Elements of Harmony and turned him into stone. After 1,000 years, he breaks free and sets out to tear the bonds of friendship, only to underestimate it and is re-imprisoned into stone. He is later freed and learns to change for the better by the Mane Cast (namely Fluttershy) after Princess Celestia finds a more constructive use for his powers, as well as the fact that Discord never had a friend before (which may have been the reason for his previously naughty behavior). Despite this, Discord is still more than willing to play tricks on others while trying to be a good friend.

Tip: Never tempt fate to a draconequus who can conjure ANYTHING with a snap of his fingers.

Example of:
Cue the Flying Pigs

Tip: Never tempt fate to a draconequus who can conjure ANYTHING with a snap of his fingers.