You Will Be Spared 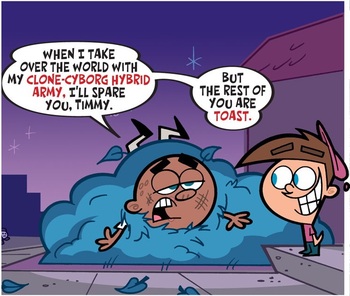 It's always good to know who your friends are.
"You're a funny guy, Sully, I like you. That's why I'm going to kill you last."
— John Matrix, Commandonote He lied.
Advertisement:

Part of a villainous stock phrase that usually goes "When I Take Over the World, you will be spared." The other common variations are "I think I'll kill you last" and "Your death will be quick and painless."

Usually, the villain will make this promise to anyone who helps him, or to someone they feel indebted to, are friends with, or are in love with. If the villain really likes this person, expect them to sweeten the deal with a Shiny New Australia. This is generally played for laughs, since few "realistic" villains are quite so egomaniacal that they bandy out the lives of others this way.

If said to a hero, it may because they're Friendly Enemies. An Omnicidal Maniac may either express a desire to preserve one person or event that they like, or say that it's the one thing they'll miss after destroying the world. If they are sparing someone because that person had previously shown them kindness, then this overlaps with Because You Were Nice to Me. If they believe the person or people they spare have some sort of Uniqueness Value, that's Sparing the Aces. If they deliberately spare someone to have the person suffer from guilt, that's Cruel Mercy. If the villain doesn't even feel the need to deal with the individual, they're Not Worth Killing.

An alternative reason for a villain to invoke this trope is to leave behind a witness to tell of their misdeed, intending for it to have a demoralizing effect on the villain's enemies.

Alternative Title(s): Kill You Last, Your Death Will Be Quick