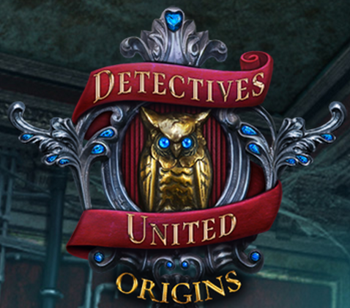 Detectives United is a series of Hidden Object Games from Elephant Games. It brings together heroes from three of their biggest mystery game series to fight incredibly complex crimes that they would separately be unable to handle. Anna Gray and her father Richard from the Grim Tales series, James Blackthorne from Haunted Hotel, and Agent Brown from Mystery Trackers become a united front of field agents who delve into the impossible.
Advertisement:

, explains how the partnership came into existence. The Mystery Trackers organization is contacted by the Queen of the United Kingdom, asking for help, and they soon find themselves working alongside James and Anna to save the world from being completely undone.

The sequel, The Darkest Shrine

, brings the team in to stop a mysterious organization called S.H.R.I.N.E., which is using dark magic to summon monsters and destroy significant locations around the world. Their motives are unclear, but they have to be stopped.

, picks up with the Sequel Hook from the second game's bonus chapter. Anna's dark copy from the alternate dimension breaks up the trio by sending them to different points in history, with directives to acquire certain artifacts. They have no choice but to play along since she's holding all of their futures hostage, even as they search for a way to stop her altogether.

The fourth game, Phantoms of the Past

, splits up the heroes. Agent Brown has not returned from his latest case, and James and Anna must find out what's happened to him. The trail leads them to the placid town of Restville, where a mysterious mayor and streets lined with blue roses seem to be hiding something.

, takes place not long after the previous case is concluded. Agent Brown has invented a device to help him locate sources of paranormal activity, and stumbles into a new mystery while following its lead. At the same time, James and Anna have separate visions about a soulless man with a violin and a woman begging for assistance in reviving her lost love at any cost. It'll take all of their combined abilities and skill to figure out how everything is connected, and how to stop it.

Advertisement:
open/close all folders
Tropes for the entire series
Origins
Darkest Shrine
Timeless Voyage
Phantoms of the Past
Deadly Debt