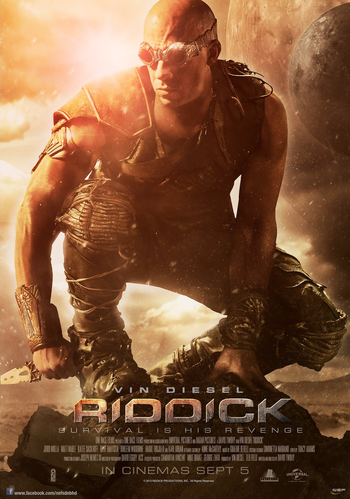 Riddick is a Sci-Fi action film in The Chronicles of Riddick series, released in September 2013.

Following the events of The Chronicles of Riddick, perennial badass Riddick has been betrayed by the Necromongers and left for dead on a desolate, arid planet covered in deadly monsters. His only apparent way off is to activate a beacon that will draw mercenaries to him like vultures to a corpse.

One ship brings a more lethal and violent type of mercenary, while the other brings a man whose hunt for Riddick is more personal than claiming a bounty. Oh, and a deadly storm is coming that will annihilate them all if they don't get off-world.