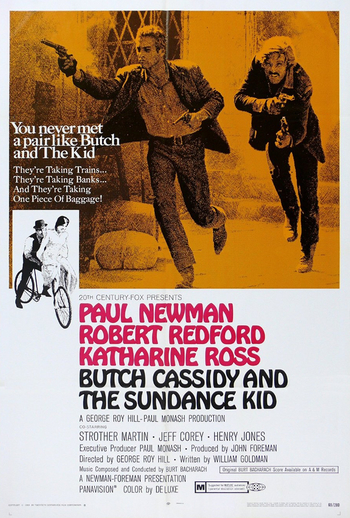 A 1969 western directed by George Roy Hill, written by William Goldman, and starring Paul Newman (as Butch) and Robert Redford (as Sundance.)

Loosely based on the Real Life story of two outlaws who fled to Bolivia in an attempt to outrun their pursuers, the movie follows the Hole-in-the-Wall gang led by Butch Cassidy, making their living robbing banks and trains. When they are ambushed, and most of the gang scattered or killed, Butch and Sundance, along with Sundance's girlfriend Etta (Katharine Ross), make their way to Bolivia where "banks are easy". Although in the end, things don't turn out quite as they planned.

A big box-office hit, this film also won four Academy Awards: for Best Original Screenplay (Goldman), Cinematography (Conrad Hall), Original Score (Burt Bacharach), and Original Song ("Raindrops Keep Fallin' on My Head"). It helped make a star of Robert Redford. In recognition, he named his ski resort after his character from this film, which also carried over into the Sundance Film Festival held there each year, the largest film festival in the country.