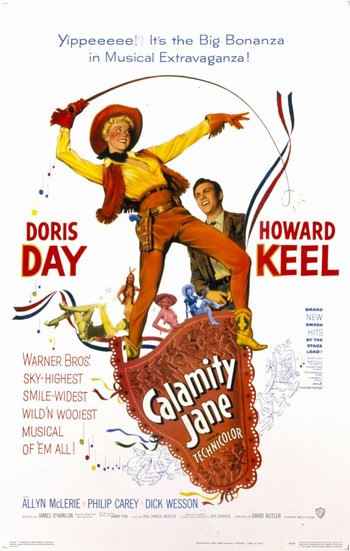 "Excitement? Why, I got more arrows in the back of that coach than a porcupine has got stickers!"
— Calamity Jane
Advertisement:

A 1953 musical film about the famous Wild West frontierswoman and gunslinger, Calamity Jane starred Doris Day in the title role and Howard Keel as Wild Bill Hickok. One of the film's songs, "Secret Love", became an Academy Award-winning hit for Day.

Calamity Jane comes to the town of Deadwood, South Dakota one day. She decides to revitalize the local saloon by bringing them Chicago star Adelaide Adams. Unfortunately, she instead brings them Adelaide's maid, Katie Brown, whom she found trying on her costumes. Katie becomes a hit with everyone, including Jane's secret love, Lt. Daniel Gilmartin. A rivalry for his affections with Katie ensues.