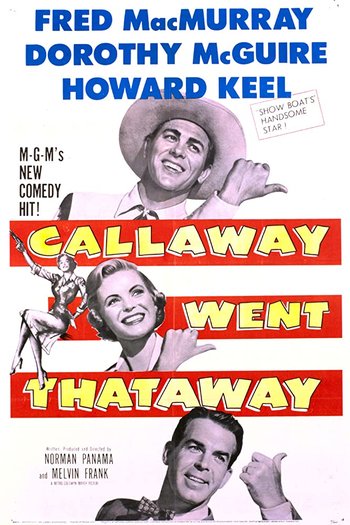 Callaway Went Thataway (also called The Star Said No) is a comedy film from 1951, written and directed by Norman Panama and Melvin Frank and starring Fred MacMurray, Dorothy McGuire, and Howard Keel. It spoofs the TV cowboy craze of the era.

Mike Frye (MacMurray) and Deborah Patterson (McGuire), co-owners of an advertising firm, discover they have a hit on their hands when they recycle old Western film shorts for a newer television audience. But when the sponsor wants to make new episodes, they find out that nobody has heard from the star, "Smoky" Callaway, for a decade. After they come across a real cowboy, "Stretch" Barnes (Keel), who looks a lot like the missing Smoky, they convince him to try and play the part by saying the real Smoky is dead. Too bad "Smoky" Callaway (also Keel) is still alive, now an alcoholic womanizer living in Mexico.