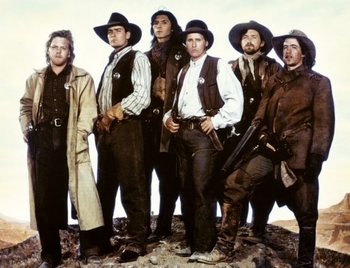 A group of men deputized by The Sheriff or U.S. Marshal to assist in the pursuit of justice, such as capturing fugitives.

The word comes from the Latin phrase "posse comitatus", roughly "to have the right to an armed retinue." In the old days, it would sometimes be necessary for a sheriff to get a lot of manpower very quickly to deal with a crisis. To this end, he could essentially draft any man handy (with certain restrictions) into a posse to handle the situation. The process will often include the line "I hereby deputise you."

After 1878, it was illegal to use military personnel in a posse. In more modern times, many jurisdictions have banned the formation of posses, but sheriffs seldom have need of them due to improved communications and manpower.

Note that if it is not legally convened by a sheriff or marshal, the group of men is not a "posse", even if they call themselves that. They're just a mob or gang. Although, if they do claim to be an apparatus of justice, see Vigilante Militia.

In modern slang, a "posse" is just a group of people who hang out with each other all the time; see Girl Posse and Production Posse for examples of this sort of "posse."