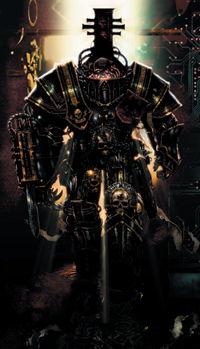 A Gaiden Game set in the Warhammer 40,000 universe. Inquisitor focuses on the details of the Emperor's Most Holy Inquisition, specifically the ideological schisms and factional infighting that plague that organization, and the problems that arise when two loyal Imperial servants with unlimited authority have a disagreement with each other. It's notable for providing the first real insight into the workings of the Inquisition, which was portrayed in most previous materials as being monolithic, inscrutable, and united in the face of mankind's enemies.

Inquisitor is a "narrative wargame," designed more around telling stories than providing fair and balanced competition between two players, and in many ways could be considered the spiritual forefather to the first true 40k roleplaying game, Dark Heresy. It also served as the inspiration for the Eisenhorn series of novels by Dan Abnett. The game is also notable for its miniatures, which (at 54mm scale) are approximately twice as large as a normal 40k miniature, with a correspondingly increased level of detail. Although Games Workshop no longer actively supports Inquisitor, the spirit of the game lives on through a dedicated fan community, examples of whose work can be seen in the semi-regular "Blanchitsu" feature of Games Workshop's White Dwarf magazine.