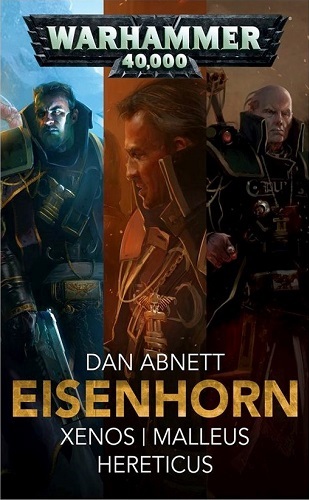 All my life I have had a reputation for being cold, unfeeling. Some have called me heartless, ruthless, even cruel. I am not. I am not beyond emotional response or compassion. But I possess - and my masters count this as perhaps my paramount virtue - a singular force of will. Throughout my career it has served me well to draw on this facility and steel myself, unflinching, at all that this wretched galaxy can throw at me. To feel pain or fear or grief is to allow myself a luxury I cannot afford.
— Gregor Eisenhorn, 240.M41
Advertisement:

Eisenhorn is a trilogy of novels by Dan Abnett set in the Warhammer 40,000 universe, following the adventures of Inquisitor Eisenhorn and his retinue as they combat the enemies of the Imperium of Man. Throughout the books, Eisenhorn finds himself having to use increasingly desperate and dangerous means against his foes.

The first book, Xenos, starts with Gregor Eisenhorn and his crew pursuing a heretic in a seemingly routine task when they uncover a mysterious artifact bearing the preserved mind of the heretic Pontius Glaw. In the subsequent investigation, Eisenhorn and crew find themselves embroiled in a heretic group's plan to contact aliens for a daemonic text.

The second book, Malleus, begins with a major celebratory parade ruined by Chaos-linked renegades. The pursuit of these enemies leads to Eisenhorn uncovering and defeating a much-revered Inquisitor gone to Chaos.

The third book, Hereticus, sees Eisenhorn pursued by allies of Glaw and his attempt to stop Glaw from acquiring a world-ending power.

The fourth book, The Magos, is set between the Ravenor and Pariah Trilogies, and serves to bridge Eisenhorn's role between the two. Unlike the previous 3 books, it isn't a first person narrative and predominately focuses on the character of Magos Drusher, a bystander dragged into a case by Eisenhorn himself.

There are also several short stories available, two of which can be found in the doorstopping omnibus edition. The series is followed by the Ravenor and Bequin trilogies.

Eisenhorn also appeared in a the set of Audio Dramas, collectively called Talon and Thorn.

A video game adaptation of Xenos, developed by Pixel Hero Games, was released on August 8, 2016. A live-action television adaptation

from the showrunner behind The Man in the High Castle is in development.

As part of Warhammer 40,000, the series involves a large number of the tropes on that page, as well as employing literary and narrative tropes of its own: