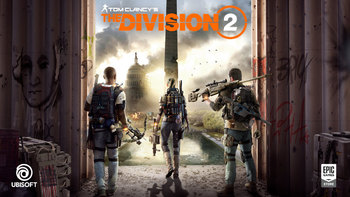 The fate of the Free World is on the Line
Advertisement:

Tom Clancy’s The Division 2 is an open-world Third-Person Shooter Massively Multiplayer Online Role-Playing Game under the Tom Clancy brand and a sequel to The Division, which was released worldwide on March 15, 2019. It takes place throughout Washington D.C. in the summer, in contrast to New York in the first game when it was set in winter.

The game takes place six months after New York City-based Division agents and their allies in the Joint Task Force were able to secure the downtown area from various hostile factions prowling around in the aftermath of the collapse of federal and state government control. In terms of the story, it takes place seven months after the Dollar Flu virus outbreak began and led to the collapse of numerous countries.

Division agents based in Washington D.C. were summoned to take control of the city in the absence of the federal government, which collapsed during the outbreak. The only authority power are numerous warlords and armed groups vying to take control of various parts of the city, leaving civilians not in their areas of influence to fend for themselves.

The game's first paid expansion pack, Warlords of New York, has D.C.'s agents getting shipped out to lower Manhattan to find and hunt down Aaron Keener and his network of rogue Agents, who have since gained a significant foothold in the city since the events of the first game that transpired eight months prior.

The Division 2 provides examples of: