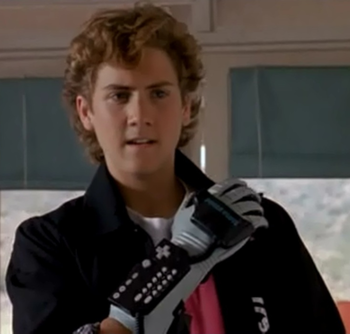 Gloves that enables the wearer to do cool stuff. It may be used as Phlebotinum-Handling Equipment.

See also Power Fist (basically the weaponized brother), Tricked-Out Shoes (the shoe counterpart), Super Wrist-Gadget (and Gadget Watch), Electric Joybuzzer, Arm Cannon, and Ring of Power. High Class Gloves are for elegance instead of cool abilities but on a character who is Silk Hiding Steel they could be both. See also Magical Accessory for other pieces of cool stuff enabling jewelry and trinkets.