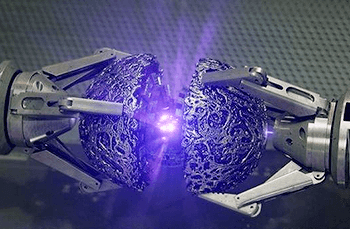 Some Phlebotinum is (more or less) harmless to living beings; it can be handled, carried around, or stored in everyday containers without any long-term side effects for those transporting it. Other forms of Phlebotinum are hazardous stuff in their own right, where prolonged exposure, physical contact, or even sniffing the fumes can have harmful, permanent, and/or fatal consequences.

In order to manage or transport the latter kind, you need Phlebotinum-Handling Equipment. This be anything from simple gloves (or a Hazmat Suit) to avoid physical contact, specially marked containers to keep the material secure and prevent it from irradiating the surrounding areas, or specialized machinery used to handle the material remotely (especially if it there is a lot of it). Sometimes Phlebotinum-Handling Equipment may itself run on a different kind of Phlebotinum, or provide effects that counter or neutralize the hazards presented by the Phlebotinum being handled. The specialized equipment may also be used to alter the material's States of Phlebotinum later.