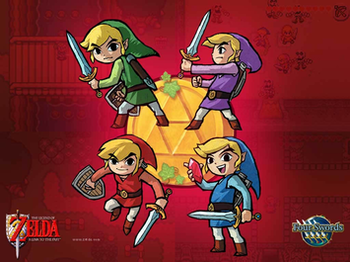 (Probably) Not quadruplets.
"That is the sacred blade I spoke of, the Four Sword. Sealed away in its forged steel is Vaati, the wind mage."
— Princess Zelda
Advertisement:

The story for the game, though not terribly important, involved the wind sorcerer Vaati, who had been sealed away before, escaping from his seal and capturing Princess Zelda with the intention of making her his bride. Link obtains the Four Sword and uses its magic powers to split into four copies of himself (green, red, blue, and purple). The four Links must work together to defeat their foes in the various areas and make their way to the final fight against Vaati. Of course, there's plenty of room for competition as well as cooperation.

According to the Hyrule Historia, Four Swords is chronologically the third game, after Skyward Sword and The Minish Cap (this game's prequel), and is the last game before the timeline is split into three by the events of Ocarina of Time.